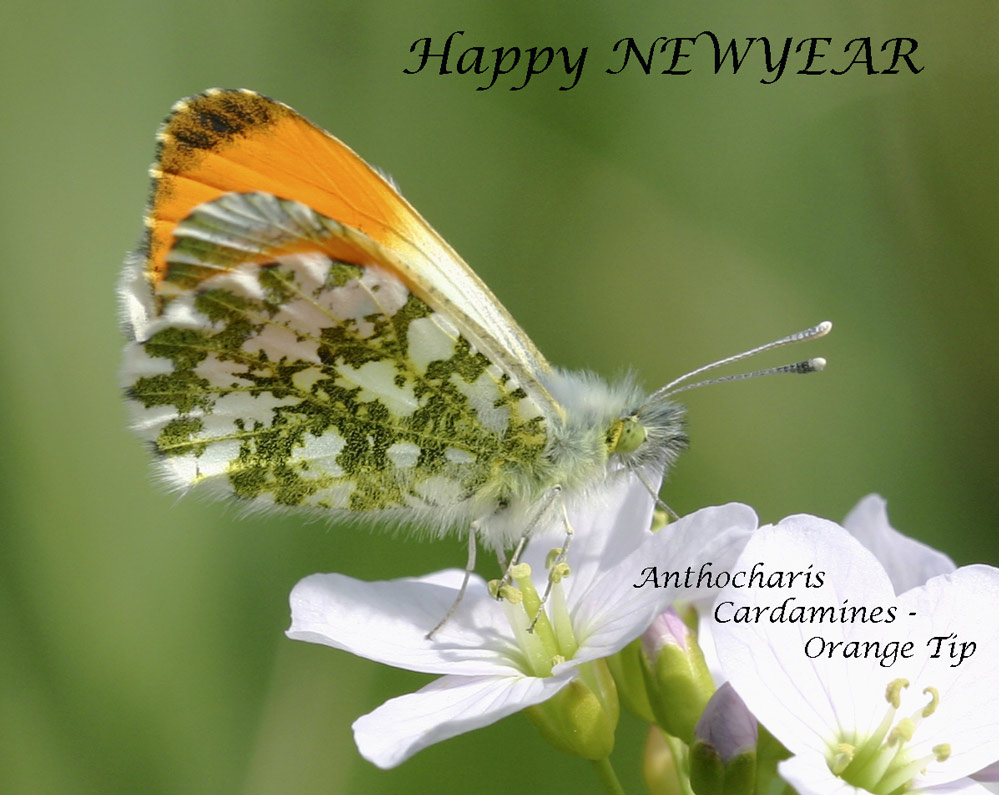 The Orange Tip (Anthocharis cardamines) is a butterfly in the Pieridae family.

So named because of the males bright orange tips to his forwings. The males are a common sight in May flighing along hedgrows and damp meadows in search of the more reclusive female which lacks the orange and is often mistaken for one of the other 'White' butterflies. The undersides are mottled green and white and create a superb camaflage when settled on flowerheads such as Cow Parsley and Garlic Mustard Alliaria petiolata. The male is able to hide his orange tips by tucking the forwings behind the hinwings at rest(like on this picture!). If you look closely at the mottling you will see that the green colour is in fact made up of a mixture of black and yellow scales. It is found across Europe, and eastwards into temperate Asia as far as Japan. The past 30 years has seen a rapid increase in the range of the Orange Tip in the UK particularly in Scotland and Ireland.

The female lays her eggs on the flowerheads of Cuckooflower Cardimine pratensis and Garlic Mustard and occasionally other species of wild Crucifers. The eggs are white to begin with but change to a bright orange after a few days before darkening off just before hatching. Because the larvae feed exclusively on the deveoping seeds there is rarely enough to support more than one larvae per plant. If two larvae meet one will normally be eaten by the other so ensuring that at least one of them survives. Newly hatched larvae will also eat unhatched eggs for the same reason. To stop eggs from being laid on plants already laid on the female leaves a pheromone to deter future females from laying. Pupation occurs in June or July in scrubby vegetation near the foodplant, where they stay to emerge the following spring. Recent research suggests that the emergence of the butterfly may be delayed for as much as two years, thus ensuring the species against unfavourable conditions in a given season.